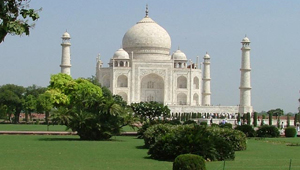 Taj Mahal standing proudly on the bank of the river Yamuna in Agra, is India's noble tribute to the grace of Indian womanhood. Built by Shahjehan, the 5th emperor of Mughal empire in the memory of his beloved wife Mumtaz Mahal, Taj Mahal is the largest and the most expensive mausoleum built by any man on earth.

The "Symbol of Eternal love", Taj at Agra is undoubtedly one of the most spectacular marvel of the world. Renowned for its architectural magnificence and aesthetic beauty, it considered among man's proudest creations and is constantly included in the list of the world's topmost wonders. As a tomb, it has no equivalent upon earth, for mortal remains have never been housed so opulently. 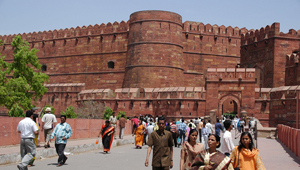 Though Agra is more famous world over as the city of Taj, Agra Fort is another dimension to the city that attracts tourists in hordes. Built by Akbar in Red Sandstone when he was through with the consolidation of his power after accession to power in 1654, Agra Fort worked both as a military strategic point as well as the royal residence. Many of the palaces inside the fort were later added by next generations of Mughal Emperors like Jahangir and Shahjahan. 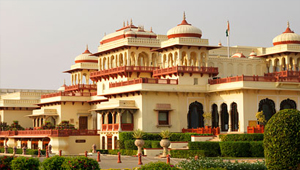 Laid out in 1528 by Babur the first of the Mughal emperors this is the earliest Mughal garden. It is said that Babur was temporarily buried here before being permanently interred at Kabul in Afaganisthan. The Ram Bagh is 2 to 3 km further north of the Chini Ka rauza on the riverside and is open from sunrise to sunset. 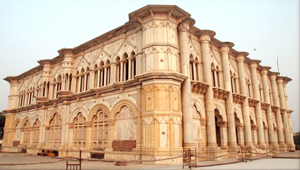 This haveli was built about 300 years ago and a part of it is still occupied. Salim Singh was the prime minister when AGRA was the capital of the princely state and his mansion has a beautifully arched roof with superb carved brackets in the form of Peacocks. The mansion is just below the hill and it is said that once it had two additional wooden storeys in an attempt to make it as high as the maharaja's palace, but the maharaja had the upper storey torn down. 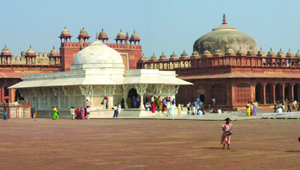 The site is founded by Akbar the great, who at 26 years did not have a heir. He went to a saint, Shaikh Salim Chishti who lived in a city called Sikri. His blessing gave Akbar 3 sons. As a gesture, Akbar built a whole new city in Sikri.

It was built between 1569 and 1585 and was intended to be the joint capital with Agra, but was soon deserted because the water system could not support the any residents. It remained untouched for over 400 years now and its palaces are a remainder of the extravagance of the Mughals. 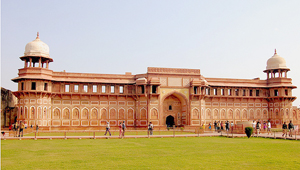 Undoubtedly, the most noteworthy building inside Agra Fort is The Jahangir Mahal which was the principal zenana palace, used mainly by the Rajput wives of Akbar. A splendid gateway leads to an interior courtyard surrounded by grand halls covered with profuse carvings on stone, heavily fashioned brackets, piers, and crossbeams. One can still spot remnants of decoration in gold and blue done in the prevalent Persian style.

Jahangiri Mahal mixes Transoxanian (Central Asian) features, such as the verandah on the east front with its high slender columns, with courtyard halls styled in the broader Gujarat-Malwa-Rajasthan tradition as it had been passed onto the Mughals by the early 16th-century architecture of Raja Man Singh of Gwalior. This exotic medley and adventurous eclecticism suggests a daring approach in architecture.Jahangiri Mahal is the most important building of the Akbari period in the Agra Fort. 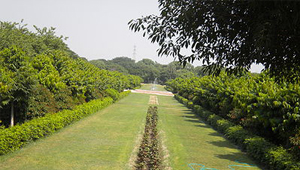 Agra's Mehtab Bagh is a 25-acre plot has now transformed into an epicenter for the top court-ordered project to set up protective greenways around the Taj. As the land is reclaimed, historians and geographers from around the world are trying to learn about the wonderful garden that once existed near this oasis. An advance technology inspired from Iran has been applied to bloom the Mehtab Bagh once again. Mehtab Bagh in Agra will again flower with fragrant and colorful flowers which will surely produce the sweet smell of the glorious past. 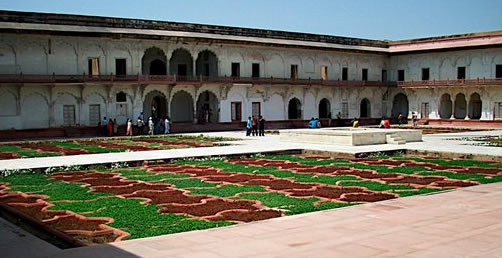 Shah Jehan built Anguri Bagh or the Garden of Grapes in 1637. With Khas Mahal to its east and red sandstone arcades on the other three sides, it was the principal square of the zenana apartments or the living area of the royal ladies. There was a marble paved platform with a fountain in its centre and the garden itself was divided into compartments in intricate geometrical pattern. As the name suggests, this garden was known for harvesting choicest of grapes and flowers throughout the year. It was designed to be a pleasant retreat or the paradise garden for the royal ladies and ensured their complete privacy. Hammams or imperial bathhouses adorned with exquisite wall paintings in royal blue and gold were located to its northeast. The tanks near the Jehangiri Mahal ensured the water supply to the ponds and baths of this garden. 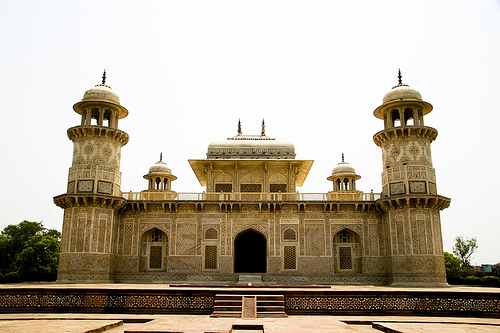 Before the Taj Mahal was built, its design was already standing in the form of Itmad-ud-Daulah's Tomb. Built to represent a silver jewel box in marble, this mausoleum houses the body of Mirza Ghiyas Beg, the father of the Mughal Empress Noor Jahan. After Noor Jahan married the Mughal Emperor Jahangir, Mirza Ghiyas Beg was appointed the Lord Treasurer of the Empire or "Itmad-ud-Daulah".

After her father's death, Noor Jehan built this mausoleum in memory of Mirza Ghiyas Beg, from 1622-1625 A.D. The first example of a tomb built on a riverbank in India, Itmad-ud-Daulah's tomb situated on the banks of the Yamuna, has many design features that were later used in the Taj Mahal. Itmad-ud-Daulah's tomb marks a significant departure from the tombs of the Mughal dynasty built earlier, because this tomb follows the central Asian pattern of a domed structure, set in a formal garden, with waterways and paths laid out in a geometrical pattern, a design followed while constructing the beautiful Tajmahal. 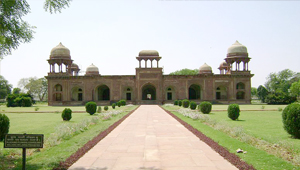 Mariyam's Tomb, an exquisite construction of 1611 AD, is located at Sikandra in the Christian Missionary Society compound about 13 km from Agra. The tomb is built for Mariyam, Mughal emperor Akbar’s beautiful wife from Goa. This tomb has been a great attraction due to its elegant carvings on the walls and also the marvelous beauty of red sandstone structure.

Mariam known widely as ‘Mariam Zamani’, the mother of Jahangir, was a most respectable queen in Mughal dynasty. It was Jehangir built this marvelous tomb for his mother after her death. The tomb is the real specimen of Mughal style of architecture with beauty embedded design. The tomb looks alike from front or back, which is a special feature of this tomb. 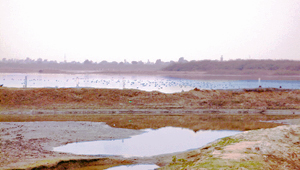 The Sur Sarovar is a picturesque lake located about 23 km away from Agra, in Uttar Pradesh. Also known as the 'Keetham Lake', this astounding water body has always been a favorite haunt for group picnickers and nature lovers. Its serene beauty is said to have had influenced the poetic imagination of the great Sur Das. This lake has been the inspiration for him to pen 'Bhakti Kavya,' a devotional poem.

Sur Sarovar falls under the Sur Das Reserved Forest and was declared as a More than 100 species of migratory and native birds are found in this 7.13 sq km of tranquil paradise. Major bird species found here are gadwals and shovellers, bar-headed geese, brahminy ducks, sarus cranes, Siberian cranes and spoonbills. It is also home to more than 18 species of reptiles and 12 species of mammals. September to March constitute the tourist season.

The Jama Masjid at Fatehpur Sikri, near Agra is also known as the Jama Masjid. The mosque is one of the largest in India. It was constructed in 1571 A.D. during the reign of the Mughal Emperor Akbar the Great. The mosque is built at a height due due its exalted purpose and has a large courtyard where the faithful can gather to pray. To the right of the mosque is the Jammat Khana hall and then the Zenana Rauza, or the tomb of the women of the royal household.

Within the mosque complex you will find the shrine of the Sufi religious leader Sheikh Salim Chisti. The lattice marble screens of the tomb are amazing in their workmanship. The tomb was earlier built in red sandstone and parts of the original structure can also be seen.

The Buland Darwaza is a grand gateway located in Fatehpur Sikri near Agra. This triumphal arch was built by the Mughal Emperor Akbar, when he defeated the king of Khandesh or Gujarat in 1573. 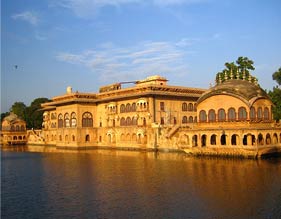 The Eastern Gateway to Rajasthan, was founded by Maharaja Suraj Mal in 1733 AD, it was once an impregnable well fortified city, carved out of the region formerly known as Mewat. The trio of Bharatpur, Deeg and Dholpur has played an important part in the history of Rajasthan.

The legends say that the place was named as Bharatpur after the name of Bharat, the brother of Lord Rama, whose other brother Laxman was worshipped as the family deity of the Bharatpur rulers, Laxman's name is engraved onthe state arms and the seals. The city and the fort have been believed to be founded by Rustam, a Jat of Sogariya clan. Maharaja Surajmal took over from Khemkaran, the son of Rustam and established the empire. He fortified the city by building a massive wall around the city. 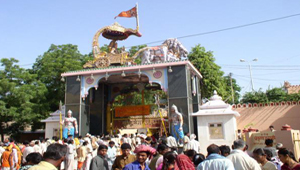 The city of Mathura, in Uttar Pradesh, the nucleus of Brajbhoomi, is located at a distance of 145 km south-east of Delhi and 58 km north-west of Agra. Covering an area of about 3,800 sq. km., today, Brajbhoomi can be divided into two distinct units - the eastern part in the trans-Yamuna tract with places like Gokul, Mahavan, Baldeo, Mat and Bajna and the western side of the Yamuna covering the Mathura region that encompasses Vrindavan, Govardhan, Kusum Sarovar, Barsana and Nandgaon.

Vrindavan, just 15 km from Mathura, is another major place of pilgrimage. It is noted for its numerous temples - both old and modern. The name Vrindavan evokes the playfulness and lovable characteristics of Shri Krishna. This is the wood where he frolicked with the gopis and tenderly wooed Radha. Vrindavan today, is noted for its numerous temples.