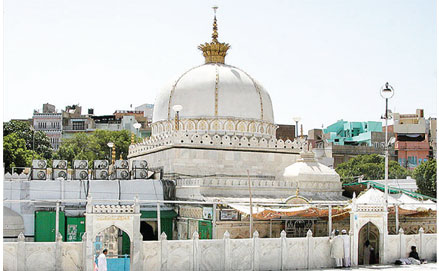 The city of Ajmer is famous as a pilgrimage site. It houses the Dargah, or tomb, of the popular 13th-century, Sufi saint Hazrat Khwaja Moinuddin Hasan Chisti. The city also boasts of a number of monuments dating back to the Mughal era. The city is also well known for its traditional handicrafts industry.

The small town of Ajmer, 78 miles west of Jaipur, played a surprisingly important role in India's history. Set at the point where the rocky Aravalli Hills end and the Thar Desert begins, this was originally the stronghold of the powerful Chauhan Dynasty of Rajputs, who built India's first ever hill fort here in the 7th century. Ajmer was founded by a Rajput chieftain Ajayapal Chauhan, who also built first hill fort in India, the Tara Garh. As the fort was supposed to be invincible, it was named Ajai Meru (the Invincible Hill). Ajmer was brought under the control of Delhi Sultanate in 1193, when Prithvi Raj Chauhan was defeated by Mohammed Ghori. It was later returned to the local chieftains albeit for a small tribute. Ajmer also played an important role in paving the way for British East India Company in India. In 1616, Jehangir met ambassador of King James, Sir Thomas Roe. That was the first meeting between any Mughal Emperor and representatives of Britain. In the 17th century, Shahjahan built marble pavilions around the Ana Sagar Lake. The Taragarh Fort was damaged badly during the Mughal war of succession between Aurangzeb and Dara Shikoh. Schindi Rulers of Gwalior took over Ajmer in the mid 18th century, to be handed over to the British in 1818.

URS fairs :- The Urs are held every year at the dargah of the Sufi Saint Khwaja Moinuddin Chirsti, Commemorating his symbolic union with God. Pilgrims from all over the world gather here to pay their homage. Qawaalis (poems) are sung in the Saint's honour. At the foot of a barren hill, is situated India's most important Pilgrimage center for people from all faith. It is the splendid tomb of the Sufi saint Khwaja Moinuddin Chishti, more popularly known as Khwajia Sharif. The shrine attracts thousands of pilgrims during the Urs commemorating the death anniversary of the Saint, held from the 1st to 6th day of the Islamic month of during this time is the major attraction.

Pushkar Festivals :- Pushkar Fair, held sometime in the month of November, is the largest and the most participated fair of Rajasthan. Apart from pilgrimage, it is the occasion of a large cattle fair. Bazaars, auctions, music and sports are highlight of this event. Though this Fair is not held in Ajmer, the town of Ajmer witnesses heavy crowd and livens up during this time due to its close proximity to Pushkar. Pushkar takes its name from the Pushkar lake near Ajmer where it is held annually. A dip in the holy waters of the lake is considered auspicious.

Temperature is very high during summers and very low during winters. Ajmer has a typical desert type of extreme climate. The best season to visit this place is between October to March. It can also be visited in the seventh month of the lunar calendar every year when the annual Urs festival is held to commemorate the death of the Sufi saint Khwaja Moinuddin Chisti.