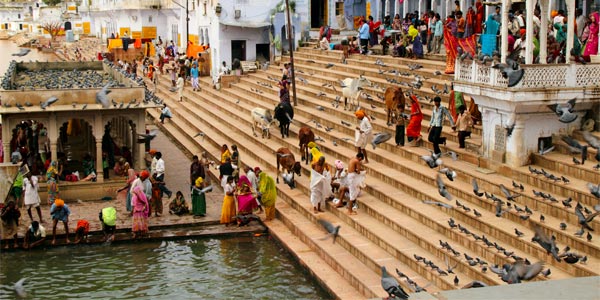 According to the Padma (Lotus) Purana, Pushkar, 15km northwest of ajmer, came into existence when Lord Brahma, the Creator, dropped his lotus flower (pushpa) to earth from his hand (kar) to kill a demon. At the three spots where the petals landed, water magically appeared in the midst of the desert to form three small blue lakes, and it was on the banks of the largest of these that Brahma subsequently convened a gathering of some 900,000 celestial beings - the entire Hindu pantheon surrounded by whitewashed temples and bathing ghats, the lake is today revered as one of India's most sacred sites : Pushkaraj Maharaj, literally "Pushkar King of Kings".

During the auspicious full-moon phase of October/ November (the anniversary of the gods' mass meeting, or yagya), its waters are believed to cleanse the soul of all impurities, drawing pilgrims from all over the country. Alongside this annual religious festival, Rajasthani villagers also buy and sell livestock at what has become the largest camel market (unt mela) in the world, when more than 200,000 dealers, tourists and traders fill the dunes to the west of the lake.

The legendary colour of the camel mela, combined with the beautiful desert scenery and heady religious atmosphere of the temples and ghats have inevitably made Pushkar a prime tourist destination.

Pushkar the sister city of Ajmer, is only 11 kms away from the city. Accounts of this city can be founded in the 4th century writing of the Chinese traveler Fa-Hien and also in the scripts writing during the era of Muslims invasions. Pushkar is famous for its fairs and festivals and for Brahma Temple. It is said that in a battle Lord Brahma killed the demon Vajra Nabh with a lotus flower whose petals floated down to earth and landed in three places in and Pushkar where Lakes sprang up the bath at Pushkar is thought to be more important than at any other place. The holy dip in this lake on Kartika Purnima is thought to be salvation giving. Pushkar is very dear to Lord Brahma. The place is famous in His name. So it is blessed by Him in every way.

In olden times the people who took a holy dip at Pushkar were relieved from all the sins and went to heaven after their death by the grace of Lord Brahma. According to another legend back in a legendary time Lord Brahma was flying over the Rajasthan desert on his swan when some petals fell from his hand and drifted down. Miraculously, blue lakes sprang up where the flowers had touched the soft sands. Just then, Lord Brahma realized that this was the auspicious moment to perform a fire sacrifice.

Pushkar Fair (Oct.-Nov.) :- A colourful and lively fair, it is one of the largest cattle fairs in the country held every year at Pushkar on Kartik Poornima (full moon, October - November) . The 9 day event is considered to be the most striking animal fair in the world. As the fair has religious significance too, pilgrims and tradesmen come in thousands from far and near. Hundreds of horses, camels, cows and bulls are brought here to be sold. The spectacular fair is irresistible. Vendor displays their attractive goods and the villagers go on a shopping spree. Colourfully filled by turbaned men and odhni-wearing women, the entire atmosphere is electric and the otherwise serene temple town comes to life.

The Camel & Horse races, parades and other cultural events are organized, which are full of fun and gaiety. After an eventful day, as the sun sets down, the entire atmosphere reverberates with the ringing bells and prayers in the temples. At night, hundreds of small oil lamps are lit and placed on green leaves and floated on the lake after the Arti Puja (prayers). the act of worship is called 'deepdan', and the entire lake is illuminated. The view is simply mesmerizing and is to be seen to be believed.

The best time to visit Pushkar is between October and May.