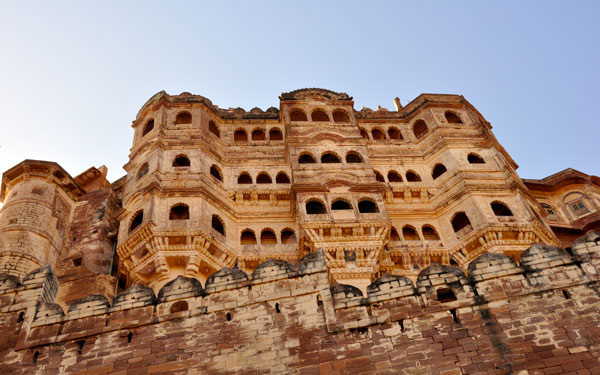 Famous for its magnificent forts and palaces, Jodhpur is the second largest city of Rajasthan and a major tourist attraction in the country. The city is situated at the edge of the Thar Desert with Jaisalmer on its west, Barmar, Jalor and Pali on its south, Bikaner on its north, and Nagaur on the eastern side. The city dominated by the massive Mehrangarh fort on a rocky hill is charming with its wealth of historic attractions and colourful markets which specialises in antiques. It is still one of the leading centres of wool, cattle, camels and salt.

Jodhpur was founded by the Rajput chief Rao Jodha in 1459. The city was the erstwhile capital of the Marwar state. A 10-km-long wall made of stone and built about a century after the city was founded, surrounds the old city. There are about 100 towers in the city, most of which are surrounded by defensive battlements. It was founded in 1459 A.D. by Rao Jodha-chief of the Rathore clan of Rajputs who claimed to be descendants of Rama - hero of the epic 'Ramayana'. Rahores controlled a large part of Rajasthan, especially during the reigns of Rao Udai Singh (1581 AD) and his son Raja Sur Singh ((1595), who conquered Gujarat and a good part of Deccan for the Mughal Emperor Akbar.

The Rathores always had good relationships with the Mughals and Maharaja Jaswant Singh (1678) supported Shahjahan in the Mughal struggle for war of succession. Only problematic relationship they had was with Aurangzeb. After the death of Aurangzeb in 1707, Maharaja Ajit Singh became the ruler of Jodhpur. He drove out Mughals from Ajmer and added substantially to the Mehrangarh Fort.

Marwar Festival :- The vibrant Marwar festival held annually brings to life, the very essence of the magic, that is Rajasthan.

The city of Jodhpur has a typical desert climate, dry and hot. November and March are the best time for a journey to Jodhpur with pleasant and sunny days.