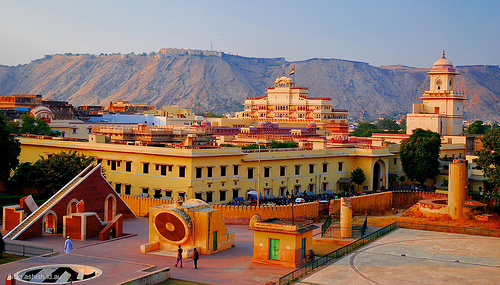 Jaipur, the vibrant capital of Rajasthan, is popularly known as the ' Pink City ' because of the pink coloured buildings in its old city. It sits on a dry lake bed in a somewhat arid landscape, surrounded by barren hills surmounted by forts and crenellated walls. This buzzing metropolis is certainly a place of wild contrasts and a feast for the eyes. All through, Jaipur has retained its strong Rajputana flavour tempered by several influences - the mughal being the most prominent. The region's strong cultural heritage is distinctly evident even today.

The city is a visitor's delight. From the intricate, delicate looking Hawa Mahal to the graphic forms of the Jantar Mantar - an open air observatory of outsized astronomical instruments, the Badi Chaupar lined with shops and business establishments on both sides to the majestic fort-palace at Amber; from the colorful fountains of life to the sublime Birla Temple; from the architectural delight of the City Palace to the serene Jal Mahal.

The city of Jaipur is the prime example of the culture and traditions of this region. . In this land, towering forts were built as much for ostentation as for intimidating the enemy; and desperate battles were fought by rulers who were great patrons of the arts. Among all the states of erstwhile princely India, Rajputana is undoubtedly the one with the most martial record - warring factions locked in deadly warfare, thousands of royal ladies consigning themselves to flames preferring death to dishonor. The royal city of Jaipur owes its name to the founder of the city.

It was Great Warrior King Sawai Jai Singh II (1693-1743) who laid the foundation of the city in 1627. He was one of the few kings of his time having a keen eye for details and a very good scientific temper. Being capital to the northern Indian state of Rajasthan, the city is mirror to every thing that Rajasthan signifies, be its culture, tradition, society, and most importantly people.

Mewar Festival :- This 18-day festival is celebrated to welcome the advent of spring and coincides with the festival of Gangaur in Udaipur. It is significant for the women of the state as it is time for them to dress in their best. The women gather to dress the images of Issar and Gangaur and then carry them in a ceremonial procession through different parts of the city. The procession ends up at Pichola Lake where the images are transferred to special boats amidst singing and festivity. Cu1tura events are held at the end of the festivities and they include songs, dances and a display of fireworks.
Gangaur :- This spring festival is held in honour of Gauri, the consort of Lord Shiva, the goddess of abundance. During the festival young girls dress up in their finest wardrobe and pray for grooms of their choice and the married women do the same for the well-being of their husbands. Though celebrated throughout Rajasthan, in Jaipur it has its own charm and attraction. Girls worship the goddess throughout the preceding fortnight. Colourful images of Gauri are taken out in procession with the town band.
Teej Festival :- Teej is especially celebrated in Jaipur, the capital city of Rajasthan. However, people of Bihar and parts of Uttar Pradesh also consider this festival an auspicious one. Though the revelry and public participation is absent here, Lord Shiva and his wife Parvati are worshipped by married women who keep a 24-hour fast for the long life of their husband. The fast is a strict one during which the women are not allowed to have even a sip of water. An offering of traditional sweets and fruits is made and women pray for the long life and prosperity of their husband.
Elephant Festival :- A festival celebrated around Holi, great occasions for the visitor, to watch several elephant sports and enjoy the festival of colours. A magnificent spectacle, it unveils the majesty and grandeur of elephants. A royal procession of sixty elephants in their best finery, a match of elephant polo and an elephant race are main events of the festival.

Best Season to visit Jaipur is in the month of October to March.