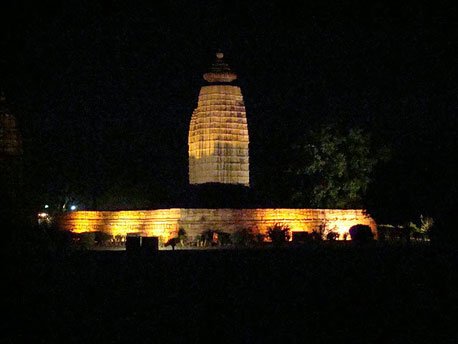 Khajuraho, the name signifies the place where a lot of Khajur trees could be found. The place is a small town located in the Bundelkhand region of madhya pradesh in India famed for a complex of exquisite Hindu and Jain temples. Built during the reigns of the mighty Chnadela rulers in the 9th and 10th century, carvings on these temples are highly erotic and sensual depicting in graceful forms intimate scenes of the whole range of human emotions and relationships. These sculptures congeal in stone a lyrical paean to love and passion and reflect the Chandela dynasty's immense appreciation for art.

Khajuraho, the temple city of central India, is famous throughout the world for its exquisitely carved temples in stones. Thousands of visitors and tourists from all over the world flock together to envisage this immortal saga of Hindu art and culture engraved in stone by shilpies (stone craftsmen) a millenia ago.

The temples are superb examples of indo-Aryan architecture, but it's the decorations with which they are so liberally embellished that has made Khajuraho so famous. Around the temples are bands of exceedingly fine and artistic stonework. The sculptures have shown many aspects of Indian life 1000 years ago - gods and goddesses, warriors and musicians, real and mythological animals.

These temples were built during the Chandela period, a dynasty which survived for five centuries before falling to the onslaught of Islam. Khajuraho's temples almost all date from one century long burst of creative genius from 950-1050 AD. Almost as intriguing as the sheer beauty and size of the temples is the question of why and how they were built here. Khajuraho is a long way from anywhere and was probably just as far off the beaten track 1000 years ago as it is today. There is nothing of great interest or beauty to recommend it as a building site, there is no great population center here and during the hot season Khajuraho is very hot, dry, dusty and uncomfortable.

Having chosen such a strange site, how did the Chandelas manage to recruit the labor to turn their awesome dreams into stone? To build so many temples of such monumental size in just 100 years must have required a huge amount of human labor. Whatever their reasons, we can be thankful they built Khajuraho where they did, because its very remoteness helped preserve it from the desecration Muslim invaders were only too ready to inflict on 'idolatrous' temples elsewhere in India.

The most important festival of Khajuraho is Mahashivratri . The festival marks Shiva's marriage with Parvati, the daughter of the Himalayas. The 2.5-m-tall lingam of Kandariya Mahadeo temple is dressed as a bridegroom, with white and saffron dhotis, and surmounted by a huge, conical, silver paper crown. The nightlong ceremony is performed by the chief priest's son who anoints the lingam with water from the sacred rivers of India.

The chanting of hymns continues throughout the night, until the Brahmins stand to throw bel leaves and flower petals over the lingam, a sign that the wedding is complete. Khajuraho festival of dance is organized every year in the months of February/March. The cream of Indian classical dancers performs here to display the best of Indian dance and music. The floodlit temples of Khajuraho provide the perfect backdrop to the festival.

A Beautiful Occasion for Dance and culture admirers: Khajuraho Dance Festival, the amazing 7-day festival is the time for electrifying dance performances every year in February / March. The best classical dancers in the country perform in an open-air auditorium, with the western group of Temples as an inspiring and awesome backdrop.

The climate of this region is tropical. The place has a typical continental type of climate with summers being hot and winters cold. Best time to be in Khajuraho is October to March. In summers it can be hotter than a furnace. Winters are dry and fog-free and also the best time to witness the Khajuraho Dance Festival of international fame.